I discuss Burgers a bunch and one topic that comes up rather often is whether or not a Patty Melt should be classified as a Burger. I’ve always felt that a Patty Melt was a Burger. I also feel that it’s almost impossible to mess one up.

The “official” ingredients are rather simple:

I can’t say that I ever remember eating a bad one anywhere and I’ve had them in many cities and states. I do encounter variations on the Cheeses (American Cheese, Cheddar Cheese) and occasionally on the Bread (Sourdough), rarely on the protein (Turkey Patty Melt). Another thing, most Patty Melt Purists say that the Rye Bread is never to be toasted only griddled on the flat top.

The Patty Melt should taste like the child of a great Burger & Grilled Cheese Sandwich.

Where did the Patty Melt come from?

Unlike the Burger or Cheeseburger where you’ve got a bunch of folks claiming to be the creators, the Patty Melt was birthed in California. Tiny Naylor owned a chain of Biff’s and Tiny Naylor restaurants in the late 1940s and 1950s. It was there that the Patty Melt made its debut.

Tiny passed in 1959 but his son Biff (yes the restaurants were named after him) now owns the Du-Par’s chain (with a pretty mean Patty Melt on the menu) and his granddaughter Jennifer now a caterer was a former executive Chef for Wolfgang Puck.

While I haven’t come across the recipe for Tiny Naylor’s original Patty Melt, I did find one for the Patty Melt Jennifer served at Wolfgang Puck’s. Remember, beggars can’t be choosers. 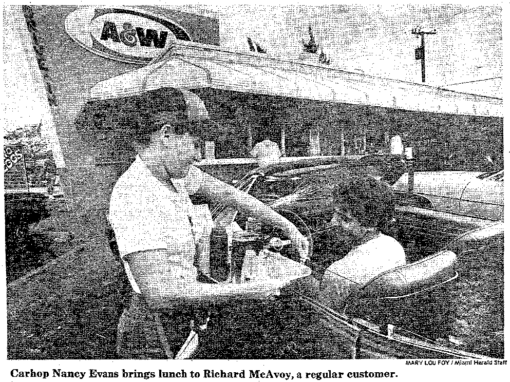 Some of these restaurants haven’t been in South Florida for decades but it might be nice if they returned.