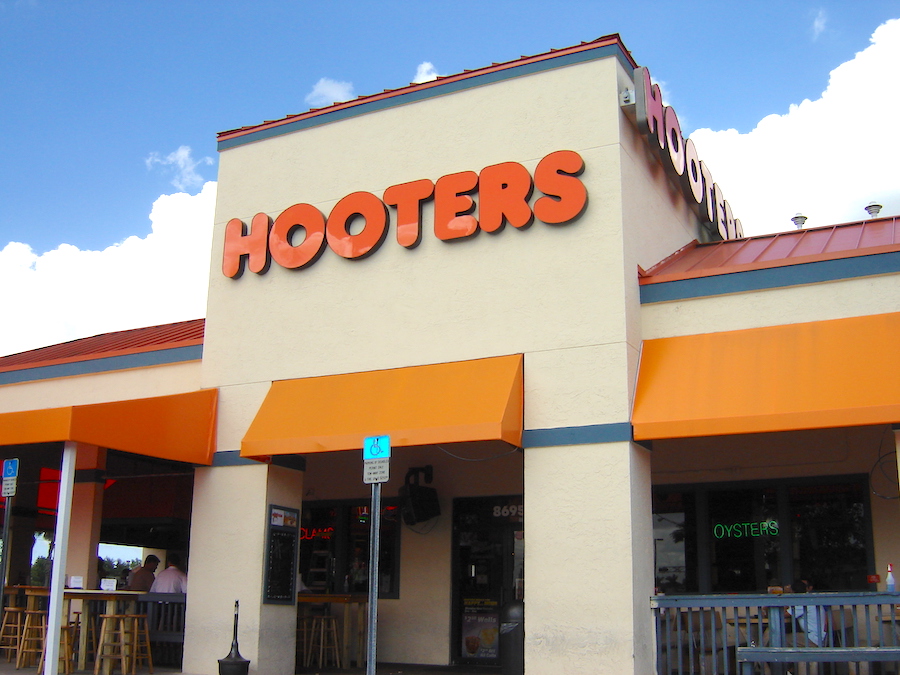 I’ve been eating at the Hooters restaurant in Doral before it was a thing. We’d walk in, and the place was primarily empty back tha day.

In those days, no family in their right mind would go to dinner, but things have changed. On my last visit, I saw a grandmother celebrating her birthday at Hooters.

For me, Hooters is predominantly an appetizer spot for Marcela and me. We order the usual suspects like buffalo wings, buffalo shrimp, deep-fried pickles, sliders, and curly fries with cheese and wash it down with a pitcher of beer.

Are the Hooters Restaurants going to win a James Beard Award? No, but in the bar food space, it’s top-notch.

We’re here to shoot the shit and have some apps; there’s nothing wrong with that.

Hooters Stories Over The Years

Going to Hooters always ends in some story that I repeat for years. Here are some Hooter stories for you:

Ed and I took Fred (when he was 13 years old) to Hooters. But, of course, as his older cousin, I was responsible for keeping him out of trouble.

The waitress shows up with our frosty beer mugs, and one is placed before Fed without asking. As she was about to pour him a beer, I said he’ll take a Coke.

In her defense, though, he was a behemoth of a kid.

Ed and I dared our friend Luis to eat the wing gristle from our 50-wing three-mile-island extravaganza, and he bravely did. Looking back on it, that was nothing, but I’m pretty sure that was the beer in us talking.

Yet, this story still comes up cause Luis behaves like it was some impossible feat.

Marcela, our friend Ernie, and I find ourselves gambling at the Hooters Hotel in Las Vegas late at night. We’re hungry so it makes sense that with up the hotel restaurant.

While waiting to order, we see the table next to us dying a slow death while eating their buffalo wings. So when our waiter arrives, we say, “We’ll take what they’re having!”

What sounded like a great idea at the time is now remembered only for the morning after and waking up with “Blood Butt.”

Marcela is witness to my almost demise at the hands of Ed. I will generally drink beer, soda, and water at restaurants.

So, as usual, I was having two different drinks. The table ordered curly fries with cheese, buffalo shrimp, and wings to start.

No small quantities for the record; there were 6 of us. I had gone to town on this stuff and ordered their Double D burger, which they no longer sell (about a pound with cheese & bacon).

It was terrific, but I was beyond stuffed. So Ed took this opportunity to make me an offer I could not turn down.

“If you were a real man, you would have another Double D!”

Famous Last Words Said To Me

Look, no one says that to me! Lol, just kidding…there’s nothing like childish games amongst friends that end badly.

The waitress had just told me she had never seen someone eat their whole Double D Burger and here I was, daring to eat a second. I gotta say to you; it was a struggle.

I had to stand up to put down the last few bites. I have never felt so physically horrible after this display of burger acrobatics.

I was in a cold meat sweat. Honestly, real bad. But I fell asleep and awoke a new man.

So just a few days ago, Marcela and I went with some of her family to Hooters. We order the usual suspects, wings, buffalo shrimp, and curly fries with cheese.

All good as usual. And deep-fried pickles. Not too shabby. I check out their burgers and see a Bleu Cheese Burger that catches my eye.

Until the waitress arrived, I planned to order the Bleu Cheese Burger. Then I looked at the menu again and saw it was a Bronze Platter.

The Bronze Platter came with a Blue Cheese Blackened Burger. Now that sounds more up my alley, it comes with a salad, but I figured I’d let Marcela have it.

By the way, I was the only one having something more than the Hooterstizers. So, my plate arrives, and the first thing I think is, why? But then, I looked, and there was no bun on my burger.

It turns out that I ordered from their low-carb menu. So after I got over my stupidity, I thought they had some nerve to have a low-carb menu. The burger was still good, though.