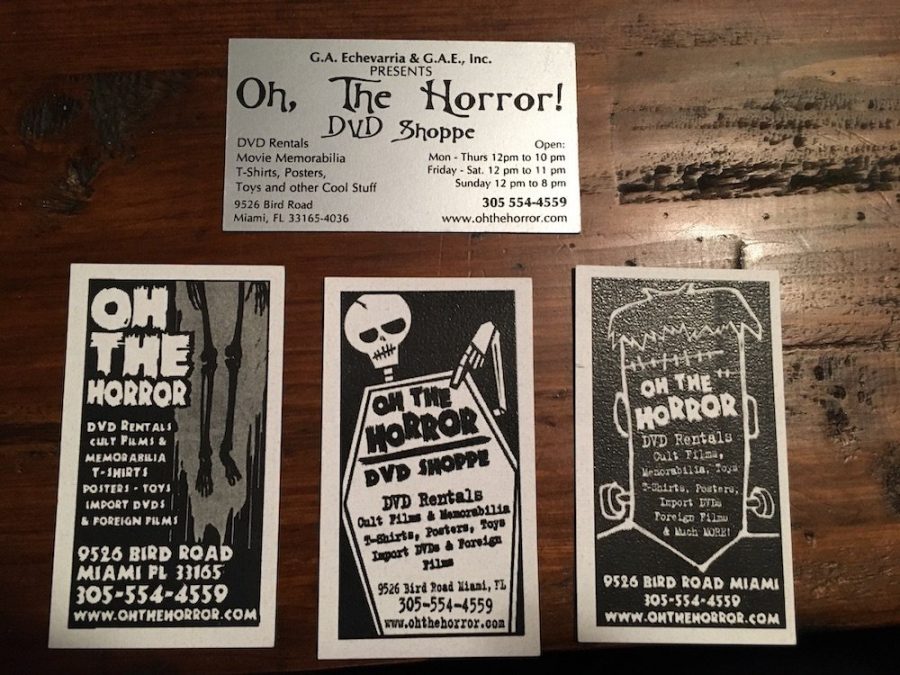 Before I was known as the Burger Beast, most folks recognized me as the guy from Oh, The Horror DVD Shoppe on the mean streets of Miami, Florida. So for this, my 200th post, I figured I would talk about my previous life.

In early 2000, I decided to go into business and get away from my retail management life. From October 2000 through October 2002, I owned a small film store focused on independent, cult, foreign & horror movies. I also planned to sell merchandise tied to those films and pop culture stuff.

I chose to open in the middle of the neighborhood where I grew up, Westchester, Florida. The store stood out like a sore thumb sandwiched between a veterinarian’s office and a furniture shop.

OTH would replace my grandfather’s printing shop, which had been there since 1976. My wife Marcela and my family were integral in getting the store opened. My grandfather suggested we condense his store to the back and use the front half for my “vision.”

When I finally arrived at a name, my family didn’t like it too much, “Oh, The Horror DVD Shoppe.” You can imagine the look of shock on my family’s faces when I laid that name on them. They thought I wanted to open a mainstream Blockbusterish type place, but they were way wrong.

The initial Idea Behind Oh, The Horror DVD Shoppe

The idea was to rent movies and sell a few shirts and memorabilia on the side. The store became known for carrying t-shirts, posters, and merchandise associated with obscure and pop culture films. It was one of the few places you could find Nightmare Before Christmas merch before it became over-commercialized.

My friend Ivonne designed the website and, in the process, taught me a little about HTML, which is still helpful to this day, believe it or not. Marcela (who also painted the killer eight ft. coffin we had on the side of the road) painted the place and put up with my annoying little gothic touches after she finished.

Marcela, our niece Ericka, my cousins Fred, and friends Emilio and Ivan (who also painted our main sign) helped put the place together and put all the DVDs in alphabetical order. Another friend of mine. Eric created the logo.

We opened at a time when Blockbuster had a minimal DVD selection. We opened to little fanfare, and it took a while to get a following. If it wasn’t for our website and eBay sales, we might have only lasted six months in business.

Lucky for us, El Nuevo Herald did an article on us in the Business section, oddly enough. Later on, the Neighbors section in the Miami Herald and finally Street (Miami Herald’s defunct New Times knock-off) also did one, which was probably the best of the 3.

We sponsored UM’s Evening with John Waters, where he autographed the poster for the event to us “Thanks for helping me spread filth!” We got to be the only vendor (other than a guy selling CDs) at the Gorefest 2.

Gorefest 2 was an event thrown by a guy I met online named Alan. It had horror movies, live music, and boxing matches. Gorefest was an interesting mix, and we had a blast.

Thanks to the John Waters event, we met Dolores Wishman. She was filming what would end up being her final film, Each Time I Kill. When I introduced myself to her at the event, I offered up the store for use in her film. Unfortunately, none of the scenes we filmed for Each Time I Kill made it into the final movie.

Last but not least, I wanted to mention Alias Nick Beal. I met Rich J. Schellbach one day when he walked into the store and just wanted to talk Horror movies, which I spent most of my day doing back then anyway. He wrote a column for the Oh, The Horror website as Alias Nick Beal.

Last But Not Least

A few final mentions go out to Jason Landrian (check out Jason’s band Black Cobra) and Carlos Giusti, as they helped out immensely with spreading the good word and doing reviews on the site. Finally, Lesther is the guy inside the store in the pic of the store exterior, was our only employee. He was a multiple Employee of the Month winner.

It was a sad day when we closed and turned out the lights for that last time; I remember my grandfather standing with me in the middle of the store that day telling me what a beautiful store it was; he was right, it was. But, above all, I want to thank those who supported the store for two years; it was a blast.

I’ve always thought my idea was a little ahead of its time. The parking situation didn’t help matters. Notice I’m not saying it was a bad idea because I don’t think it was.

If there had been all these great social media vehicles like Instagram to promote it back then, it’s possible Oh, The Horror! would still be around. But, I always think, what could I have done differently, and it’s one of those things that will be running through my head forever.

Unfortunately, all the pictures I had of the shop were lost when my computer crashed years ago, but I was able to get a copy of the logo and storefront picture through the Wayback Machine.

I’ve still got the John Malkovich cardboard face directly under the 9526 in storage somewhere.

Some of the Oh, The Horror DVD Shoppe tees and business cards are still floating around. If you were wondering who G.A. Echevarria in the top card is, it was my late grandfather.

Oh, The Horror! DVD Shoppe had three articles written about it in the paper.

The 1st one was in the business section of El Nuevo Herald, which was a bizarre choice. Later on, articles in the Neighbors section of the Miami Herald and Street happened.

The Gorefest was a two-day festival (April 19th & April 20th, 2002) with metal, wrestling, and gore films at a seedy hotel on South Beach. The hotel was remodeled many years later and is now known as the Confidante.

Luckily, my friends Carlos and Linda had these two pictures in their archives. So many thanks to them for that.

Who knows? Maybe one day, under the right circumstances, Oh, The Horror might make a return.