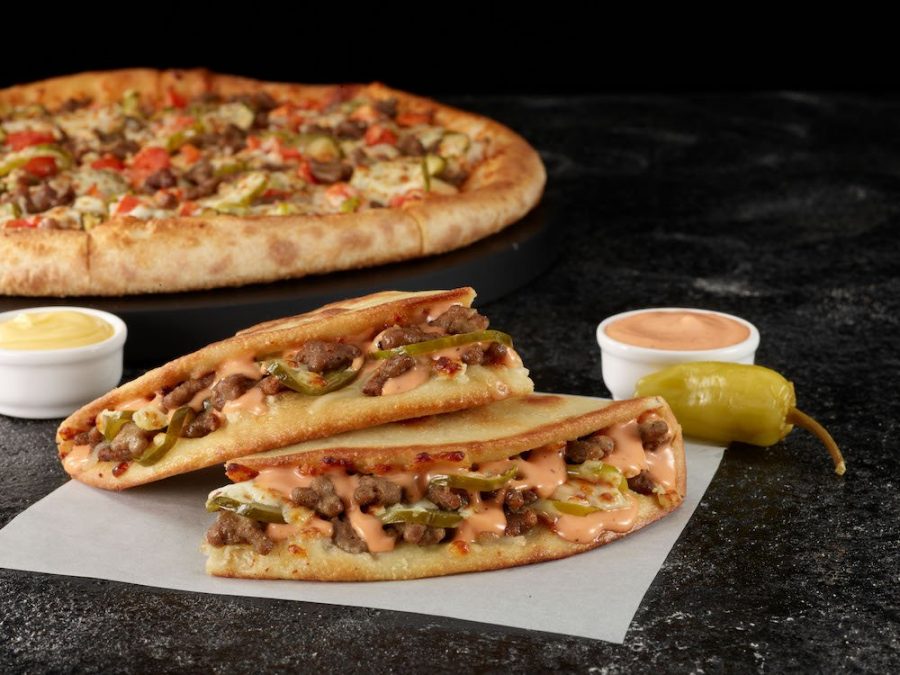 I turned them down.

I’m all about the authentic experience, so I ordered once it was available to the general public, and it was a bust. I was mostly disappointed by two things. The pickles that were lazily laid on top of the pizza, unlike Papa John’s picture. It had melted cheese on them. Secondly, and most importantly, no burger sauce to be found anywhere. It was not on the pizza and not in the papadia. Even the dipping sauce they sent was garlic and not burger sauce.

The pizza itself tasted just ok, but it is definitely no match for the vastly superior Domino’s Cheeseburger Pizza.

October 19th, 2020 – Papa John’s is bringing back their Double Cheeseburger Pizza and introducing a new Papadia version too. This pizza is now a cult favorite, so it was about time it was back to the menu even if it is for a limited time.

If you’re a Papa Rewards member, I’ve got some great news for you. Select Papa John’s location will allow you to order the Double Cheeseburger Pizza and Double Cheeseburger Papadia from October 19th – October 25th. If you’re not a member, then you should probably become a member so you can be the first one on your block to eat one of these. If you can wait, starting on October 26th, it will be available everywhere.

The Papadia is inspired by the ‘piadina,’ an Italian folded flatbread sandwich from Northern Italy. It combines the original Papa John’s crust people crave along with fresh toppings, making it the best of both worlds – it’s both a pizza and a sandwich.

Sandwiches are my thing, and these Papadias are right up my comfort food alley. The Double Cheeseburger Papadia is a quarter-pound of seasoned beef, and that’s not even counting the pickles, cheese, dough, and signature burger dipping sauce. It looks like the perfect lunch dish or afternoon snack to share with a friend. I’m not into sharing too much, so lunch it is!

Alright guys, I gotta be frank with you. I never tried Papa John’s Double Cheeseburger Pizza when it was around for a limited time in 2015 and 2018. I love the whole dipping sauce aspect of it too. We’re such a sauce obsessed nation that I’m surprised this really hasn’t become more of a thing.

Anyone try this Double Cheeseburger Pizza before? Leave a comment below and let me know what I’ve been missing!

“Our Double Cheeseburger Pizza is a limited-time product we first introduced five years ago and has inspired a big fan following. Now, Americans who love cheeseburgers can enjoy the flavors they crave both in our popular pizza, as well as a Papadia version,” said Tom Smith, Papa John’s director of culinary innovation. “The new Double Cheeseburger Papadia tastes like a cheeseburger wrapped in Papa John’s signature pizza dough. We’re confident that we can satisfy even the most discerning cheeseburger lover.”

This year, the brand continues its commitment to innovation, building on its foundation of quality ingredients. This latest menu addition follows a variety of new products launched earlier this year, such as the Grilled Buffalo Chicken Papadia, Jalapeño Popper Rolls , and the limited-time offer Shaq-a-Roni pizza.