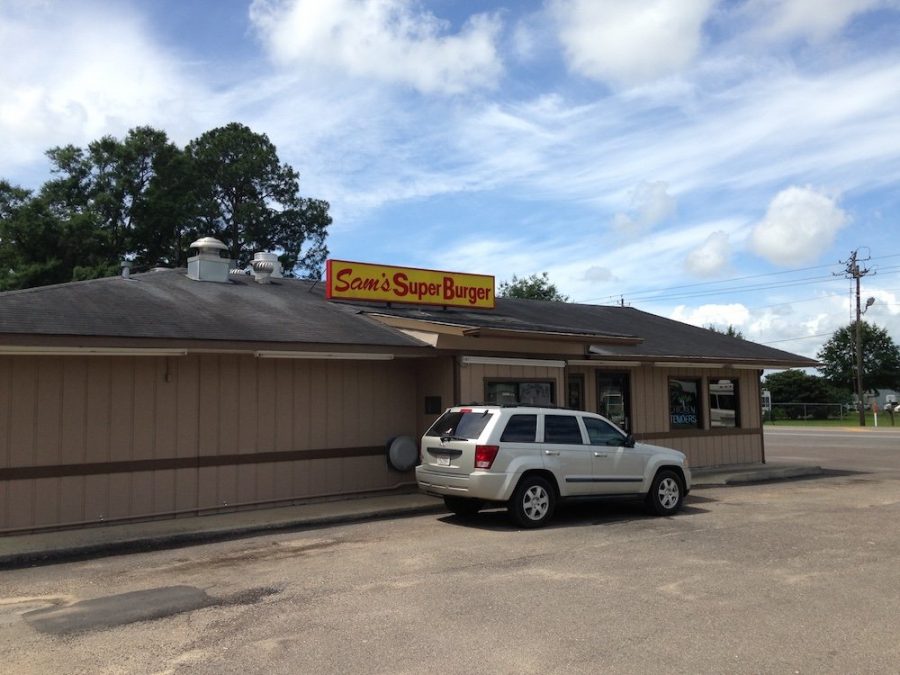 During our road trip from Miami to Mississippi, we need to stop for gas occasionally. I prefer that the stops coincide with a town that has a locally owned burger joint. On the last leg of the drive, we stopped in at Sam’s Super Burger (8789 Grand Bay Wilmer Rd S) in Grand Bay, Alabama.

After thoroughly thinking it out, my order consists of a Super Burger Double with cheese (w/fries & drink), a Super Dog, & 3 fresh chicken tenders. I was super excited to see the branded cup with the Sam’s Super Burger logo, which I tried to keep (for my Burger Museum collection) and bring back to Miami, but I ended up losing it in Oxford, Mississippi, when it rolled under my car into oblivion.

The Super Dog had slaw, sauerkraut, chili, cheese, onion, and yellow mustard. I’m not a Sauerkraut fan, so I’m not sure why I ordered this other than to have their signature hot dog. I’d typically eat a chili dog with onions and yellow mustard. The flavors jelled well, and I’ve got to imagine this is a popular dish here.

For the last year or so, I’ve been on a chicken tenders kick.  Sam Super Burgers’ boneless chicken ranks right up there with some of the best I’ve had. They were not some prepackaged deal but made in house, and you could taste that. I was in a no sharing zone with these dudes.

The fries were cooked slightly less than I would have liked, but it’s something that I found all around the South (Northern Florida, Georgia, Mississippi, Tennessee & now Alabama). It must be a “thing” here.

The bread was toasted, the cheese was melted, and it’s a Super Burger. Besides looking like a million bucks, the burger was excellent. I spoke to the owner when I was placing my order, and he mentioned that they use Midwestern Black Angus Chuck to make their burgers.

I’m sure there was plenty of love in there too cause I felt it, and I’m still reciprocating now.