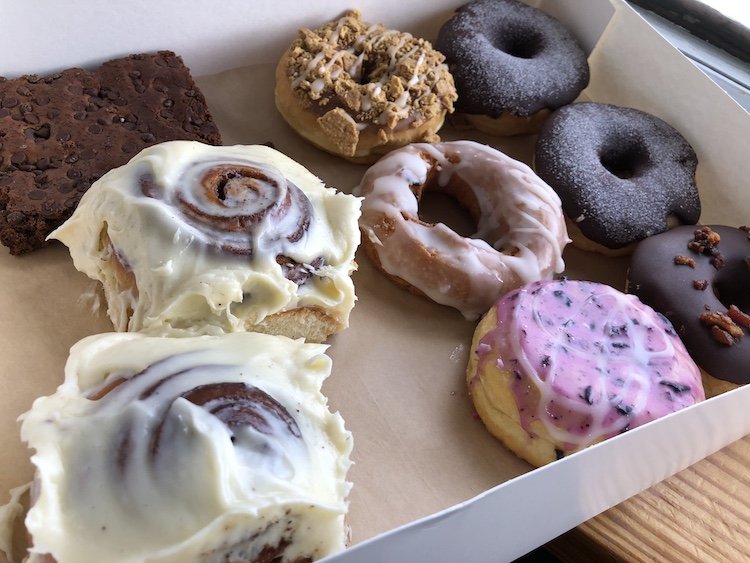 I had been waking up super early for a few weeks in a row and was looking forward to sleeping in on Wednesday or so, I thought. All it took was a message from a *trusted palate about Bake Shack (238 S Federal Hwy, Dania Beach) to change my plans for my midweek nap-fest.

Surprisingly, my wife Marcela woke up early for the drive to Dania Beach. I wanted to make sure we arrived near Bake Shack’s opening time (7 AM) since they were only open until 3 PM.

Plus, I wanted to ensure the donuts would still be available. They tend to be the first thing to sell out.

After a 30 minute drive and many unnecessary toll charges on I-95, we arrived a few minutes after seven (alright, 9 minutes actually). Our friend Tony who owns HipPOPs lives right around the corner.

I had texted him to meet us there. He’s already inside when we walk in, and I’m mesmerized by the beauty of the donuts.

I can’t decide, so I go the relatively safe route of a glazed donut, cinnamon roll, and an apple fritter trio.

They’ve got some sandwiches, breakfast dishes and a burger on the lunch side of the menu. For some reason, these two decide to get some California Sandwich, which includes lettuce, tomato, avocado, and an egg.

Yes, I said lettuce & tomato for breakfast! Uh, no, thank you.

I do the only sensible thing and order their breakfast sandwich, which brings eggs, cheese, and your choice of sausage or bacon or, in my case, sausage AND bacon. So here’s the kicker, it comes on Donut Bread, which was a nice touch, but maybe a light glaze on the top bun might be an even better idea.

There are no faults to find with these donuts. They’re airy, light, and flavorful. The glazed donut took home my award for best of the day, but I really should have given the bacon chocolate donut a shot; it looked like a possible contender.

I enjoyed the breakfast and donuts, so I need to return to try their burger. If it’s half as good as everything else, we’ve got a winner on our hands South Florida.

P.S.: I forgot to mention I had a latte, and it was delicious.