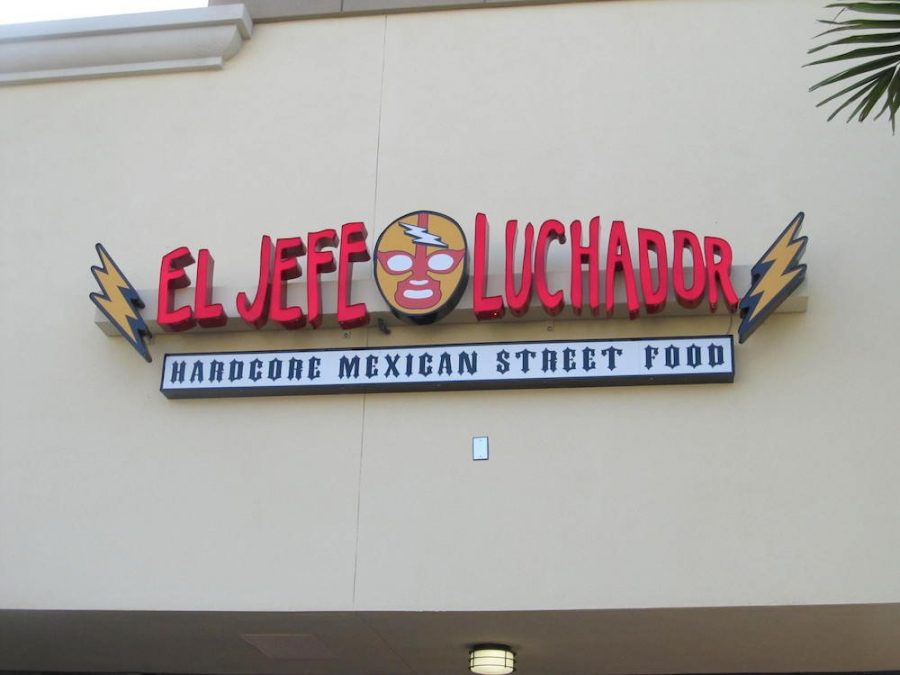 I’ve been a bad fan of El Jefe Luchador (27 S Federal Hwy, Deerfield) the last few years. Whenever I’m up in this neck of the woods, my first stop is at their sister restaurant Charm City Burger Company.

If I’ve got any space left, I head over to El Jefe Luchador for a quick taco or two. This visit to Deerfield Bach was more of the same.

I noticed some changes to the regular menu, the addition of a brunch menu for Saturdays & Sundays, along with a few order screens so you can skip the long lines. The one unforgivable menu change was their removal of the Mistico taco (barbacoa, mushrooms, Oaxaca cheese, mole negro, caramelized onion, and truffle crema).

I’m not gonna lie to you; I got over it rather quickly. Why? The Birria Quesadilla with Consomé now has my heart locked away in its Mexican hardcore street food locket.

Over the course of the last couple of years, I’ve become a giant fan of real-deal Mexican food. Also, I’ve been a fan of wrestling for as long as I can remember. My grandfather wrestled under a mask in the Caribbean, but that’s a story for another day.

When I walked into El Jefe Luchador, the first thing that I noticed was the wall of Mexican wrestling masks on the wall. Then, followed by the lucha libre-themed wallpaper on both sides of the place.

Got Decisions To Make

Once I reached the front of the restaurant, I took a good look over the menu. You have the option to choose your protein from carnitas, al pastor (from an actual spit), pollo asada, carne asada, barbacoa, chorizo, and mushrooms.

There are also combos with Compinches/Sidekicks and a drink. Marcela chose the combo with a Mexican bottle drink (either a Mexican Coke or Jarritos).

Before we took our seats, we checked out the salsa bar and took some salsa roja, salsa verde, and a couple of limes. Both had some heat, so if you’re on the wimpy side, I would steer clear.

I’ve had plenty of Mexi-corns over the last few months, and this one is near the top of that list. The cotija aioli on it was so good that Marcela housed the corn.

I could only get in a couple of bites, but I’m definitely coming back for that. We also had an order of El Nacho Libre w/ chorizo, which came with some of the best crema I’ve ever tried, some good stuff.

I liked El Santo; he was a good competitor, but Mistico took the cake for me. Just when I thought the crema couldn’t get any better, they do it up with some light truffle. I could easily put down three of these, and I probably should have.

Last but not least, we have Vampiro, who used to be one of my Mexican wrestling faves. In this incarnation, he’s a torta. A torta is Mexico’s version of a sandwich, and I find its success depends many times on the bread used.

Vampiro (pollo asado, salsa roja, Oaxaca cheese, jalapeños, guacamole, refried beans, and lettuce) was nicely toasted and could have easily made a great home for whatever combination you can come up with. I was stuffed at this point and really only took about 2 bites of it.

My ride home was a bit long, and the first thing I thought of when I arrived was Vampiro. I removed the lettuce (not a fan) and reheated it on my press. I was good to go till I thought about Mistico again. If that wasn’t bad enough, I started planning what I’m gonna have next time.

Ultimo Dragon (carnitas, hoisin salsa, and kimchee slaw) and El Jefe Luchador (al pastor, grilled pineapple, fried sweet potato, queso blanco, and salsa verde) are at the top of that list, but that could change like with any good wrestling match.

January 11th, 2011 – El Jefe Luchador is brought to you by the folks who brought you Charm City Burger Company. It’s going to be an authentic Mexican taqueria with a Mexican Wrestling theme.

Tacos Al Pastor is on the menu, and that alone sounds good to me. It should be open in Deerfield Beach sometime in Spring 2011.