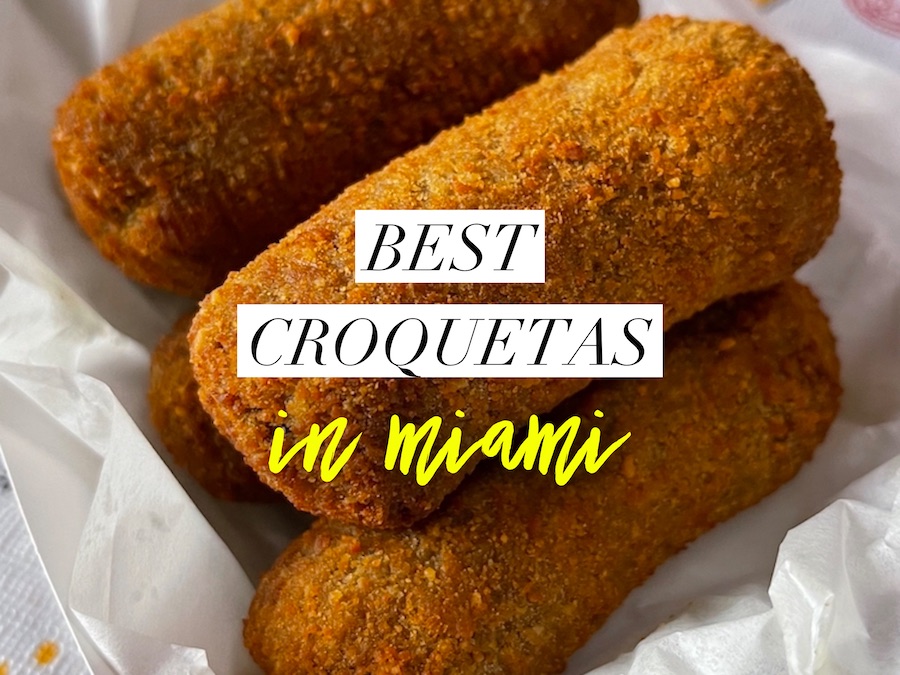 Do you know how hard it is to choose the Best Croquetas in Miami? If you’re not from Miami, then you may know these Cuban protein bars as croquettes.

In the 305, there is a full-blown obsession going on about these meat sticks. But, for the record, The most popular croquetas are made with ham, not meat.

I have eaten enough of these beauties in my lifetime to fill a cruise ship. But, unlike some of these self-righteous croquetas eaters that have recently popped up around town, I even love the kind you find in the frozen food aisle at your local supermarket.

They all have their place in the world of croquetas. So, to show my undying love to them, I created the Croquetapalooza festival!

And don’t forget, every October 1st, every self-respecting Miamian celebrates Croqueta Day in Miami. Of course, you don’t have to be in Miami to celebrate this holiday, so let’s consider it National Croqueta Day!

So, what are your Best Croquetas in Miami list? And don’t say the ones made by your Mom or Abuelita. I’d love to hear them in the comments below.

My eyes are drawn to the croquetas in the warming case the minute I step foot into Breadman Bakery. I can almost hear them singing to me.

The housemade ham croquetas are crispy on the outside and creamy on the inside. You really can’t ask for much more.

There were rumblings on the interwebs about a delicious croqueta from a delicious bakery. Were they thinking of Breadman Bakery or La Sin Rival? Nope.

Cafe Chantilly has been quietly bubbling under the croqueta radar for some time, but I could no longer ignore the recommendations. Folks, the people who wrote to praise Cafe Chantilly were right; it’s a phenomenal bakery with a delicious croqueta.

I’ve enjoyed Chef Justin Sherrer’s croquetas since he ran the kitchen at Cinebistro in Dolphin Mall. When he and his partner Lisetty Llampalla opened up Doce Provisions, I knew that the housemade croquetas would not disappoint.

I was right! Some of my dreams involve these chorizo croquetas.

My hometown Westchester has always been a hotbed for croqueta activity, which might explain my obsession with them. Dos Croquetas began as a delivery popup out of the Doral area.

In May 2019, their Croqueta Bar opened up in, you guessed it, Westchester. There’s a wide variety of croquetas at Dos Croquetas, but my personal favorite is their take on buffalo wings called the Buffalo Crack Chicken.

Many folks (myself included) believe that Islas Canarias make the best croquetas in Miami. They are the gold standard for croquetas and are untouchable when it comes to Miami’s favorite snack food, numero uno.

This one is located farthest from me of all the croquetas on my list. But I love opening up the box & looking at all these misshapen meat tubes.

One bite of these super creamy fellas will have you driving to the ends of the earth for them. What’s worse (or best, depends on how you look at it) is that there’s a drive-thru making it easier to keep your addiction going forever.

I’ve driven past the strip mall on 97th and SW 8th Street thousands of times, but I somehow missed La Sin Rival Bakery. I knew nothing of their existence until A&G Burger Joint (RIP) added a croqueta atop their burger.

These longish ham croquetas are heavy-duty with the right amount of ham, aka no skimping. I smash these fellas into a Cuban roll along with a slice of Swiss cheese, and I’m in heaven.

Luis Galindo Latin American makes a serious croqueta. Do I sound like I’m smiling? I begin every meal at Galindo’s with a few of these guys to get my engine started.

Once it’s purring, I sporadically keep eating them for fuel. The Luis Galindo croquetas are so good, and when you try the croqueta preparada, you’ll wonder why you hadn’t been eating them like this in the first place.

Masa Craft is known for excellent bar food. I mean, that’s why they’re located at MIA Beer Company. But amongst the little gems they sell are these creamy fried ham orbs inspired by the croqueta motherland of Spain.

If their version of the croqueta preparada is on the menu, grab one of those with an ice-cold brew.

The only bad thing I’ve got to say about Odaly’s Delight Cafe is that they’re not open for dinner or the weekends at all.

Now, on to the good things. Their creamy croquetas are made in-house and served with a perfect mayo-based dipping sauce.

Mike, the owner of Pikadiyo, was also a Miami food truck owner (Muscle Truck) back in the scene’s heyday. He’s always made a killer picadillo, a Cuban comfort specialty with seasoned ground beef.

It’s no surprise that a croqueta would eventually be in the works. So I was ecstatic to find out that Pikadiyo and Islas Canarias collaborated on this fantastic meat stick creation.

I’ve been a fan of these ham croquetas since Joel initially sold at Pastelmania Bakery in Little Havana.

Joel, the original owner of Pastelmania and the current owner of Pinecrest Bakery, is the mastermind behind these beauties. They’re probably one of the most massive and hammiest croquetas in town.

I usually frequent the Señor Pan Cafe on Flagler. However, their first location in West Kendall is slightly larger if you want some elbow room.

Me? I’m here for the croquetas. Señor Pan Cafe has a few different ones on the menu, but I’m partial to the ham and chorizo meat sticks.

I suggest you order the platter with four croquetas and be like the BEAST, two ham and two chorizos. Don’t forget the batido to wash them down.

I’ve eaten 10 Sergio’s croquetas in one sitting. Of course, I’m not boasting, just trying to show you the addictive nature of these particular ham croquetas.

Every meal at Sergio’s starts with eating at least three croquetas when you’re with me. Don’t skip out on the chorizo croquetas, which also deserve a few moments or bites of your time.

Empanada Harry’s is one of my favorite restaurants in Miami. Owners Harry and Michelle recently unleashed their new creation Smoke & Dough Smokehouse in West Kendall.

While croquetas might not be the first thing you’d like to order on a bbq menu, you’d be wrong.

It’s mind-blowingly great. Do yourself a favor and don’t dip the croqueta in anything, it’s perfect the way it is.