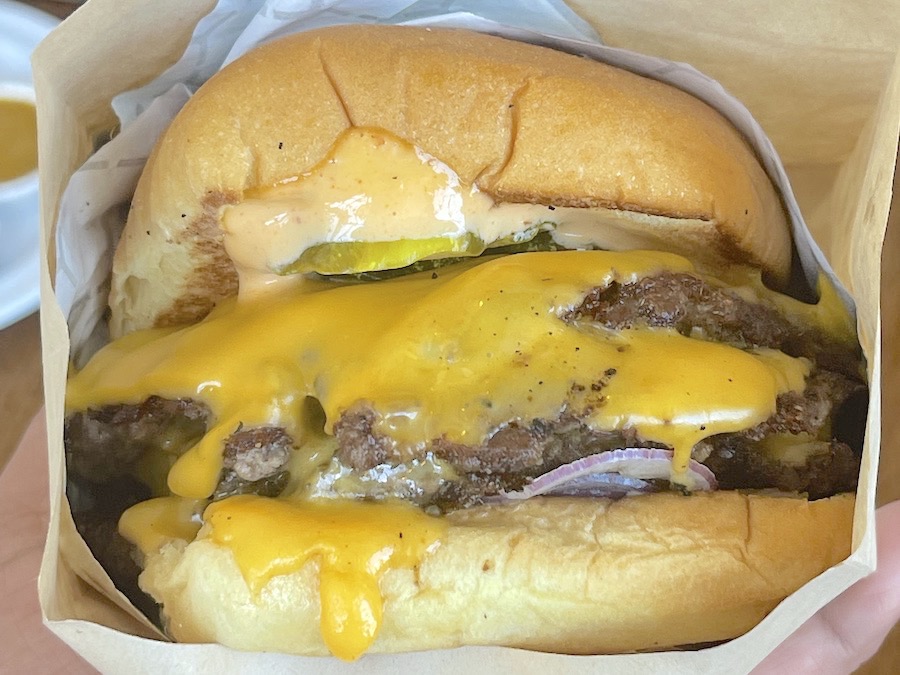 A few weeks before leaving on our 2022 food road trip, a trusted palate mentioned Tropical Smokehouse (3815 S Dixie Hwy, West Palm Beach, FL). One of our Camacho Bold Burger Battles was nearby, and he thought it might be a good lunch spot for us.

In my excitement over food stalking them on Instagram, I reached out to Tropical Smokehouse. The next thing I knew, an invite for lunch was in place.

Typically, I turn down 99.9% of invites to eat with the implicit idea that I’m gonna post pictures and rave about the restaurant. I won’t mention them anywhere if I don’t enjoy a spot.

I take the pressure off myself by paying for meals, so there are no expectations. That technique usually works unless there is some marketing machine that won’t take no for an answer, then I block them.

The minute we turn the corner, Marcela and I realize we’ve been in this neighborhood earlier in the year when I dropped her off at the antique shop across the street. We also ate a few killer burgers during our short stay in Palm Beach, Brass Ring Pub, and Hamburger Haven.

We behaved since it wasn’t on our dime and ordered the Hot & Sweet Hush Puppies with Chili-Honey Butter. I counted; there were five hush puppies and only two of us.

Someone is getting shafted unless we share the last one; fat chance of that happening. When Marcela was distracted after sampling everything we ordered, I gave up any more rights to the sliced brisket.

Yes, I’m a meat fella, but I had a burger sans bite to myself, plus I was now the proud owner of the last hush puppies. It’s all about negotiations, people!

I resisted as tempted as I was to drip those puppies in the bbq sauce samples. You have no idea how good that chili-honey butter tastes, no idea.

What Did We Eat at Tropical Smokehouse?

As I mentioned, after eating a respectable-sized bite featuring some flavorful bark, I gave up the brisket to Marcela. She took one bite of the burger, and then the mac and crinkle cuts were fair game.

The Tropical Smokehouse fries are dusted with bbq-esque seasoning. Included was some ketchup, but those bbq sauces came in handy with the spuds. The mustard-based bbq sauce complimented the papitas perfectly.

The white cheddar mac was very creamy and enjoyable, but I think they should next level it by adding some of their gator cajun sausage.

Now, onto the stupendous Old Fashioned Double Cheeseburger. Yes, it’s smashed, and damn if it isn’t one of the best I’ve ever had.

A bunch of red onions lined the bottom of the potato bun, and there’s a sriracha-mayo special sauce with some thick ass pickles topping the cheese-up burger patties. So, here is a genuine reason for folks from Miami-Dade County to make the drive to Palm Beach.

Oh yeah, one last thing…Tropical Smokehouse has smoked pig ears for your doggies. Our dog, Elsa, went to town on hers when we got home.

Remember, if you find yourself in West Palm Beach, stop at Tropical Smokehouse for a great sliced brisket and an absolutely bonkers smash burger.