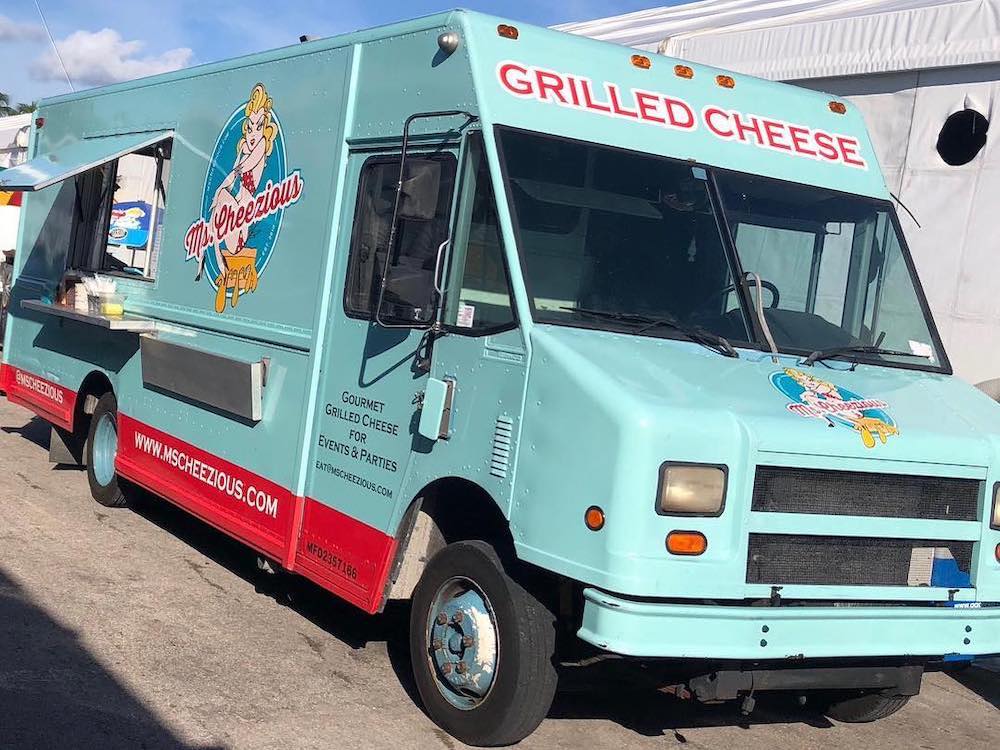 On December 4, 2010, the Ms. Cheezious food truck made its debut at a Miami Design District festival. I am normally averse to heading into that part of town during crazy events, but I had been dying to eat their grilled cheeses. My first order was the Crabby Melt, the Goat Cheese & Prosciutto, and the Grilled Blue & Bacon.

The Croqueta Monsieur, which was created for my Croqueta Palooza event, is another big-time winner. Imagine if you will ham croquetas, tavern ham, Béchamel sauce, and Swiss cheese on sourdough bread. Your day would be a whole lot better if you had a Croqueta Monsieur in your life.

There are also Turkey-Chili Cheese Fries, which is a must-have.

Since day one, Mrs. Cheezious touted itself as the sexiest truck to show up on the Miami Food Truck scene, and who am I to disagree?

This sexiness has allowed them to open a couple of food trucks and a restaurant where you can take a load off and enjoy their comfort food greatness in air-conditioning. South Floridians know that during summer, it’s a necessity.

Ms. Cheezious became the most popular food truck shortly after its launch. There is no food truck in our neck of the woods with more accolades, well-deserved accolades, I might add.

Plus, which other food trucks in South Florida have had a WISE potato chip flavor named after them?

Whenever I visit Ms. Cheezious, I ask if they’ve got any specials going on. Then, I order my usual Grilled Blue & Bacon though I’ve been known to build my own grilled cheese from time to time. You need to be following them on Instagram to find their whereabouts.

Ms. Cheezious Food from the Truck

In late 2014, Ms. Cheezious unleashed this press release. I received it a few days early before every other media outlet, the perks of being the Beast.

We use quality ingredients, we cook everything from scratch, and we have a fantastic staff, many of whom have been with us since we started 2 ½ years ago. We attribute our success so far to the combination of great food and great customer service,” said Brian Mullins, co-owner of Ms. Cheezious®. “We are very proud of our successful social media presence. When the followers leave a comment or question, we respond quickly and try to maintain a close relationship with our customers. With this natural expansion to a brick and mortar restaurant, we plan to continue offering our clients great comfort food in a relaxed setting.

February 2015 saw the opening of a Ms. Cheezious in the MiMo District at 7418 Biscayne Blvd. As expected, all your favorites from the food truck as available, as well as the addition of salads, fresh-baked desserts, craft beers, wines, and breakfast sandwiches.

Like all great spots, the menu is constantly evolving. Be on the lookout for specials like a killer meatball hero I saw pictures of recently.

As you can see below, Mrs. Cheezious really dominated at my Burger Beast Burgie Awards over the years.