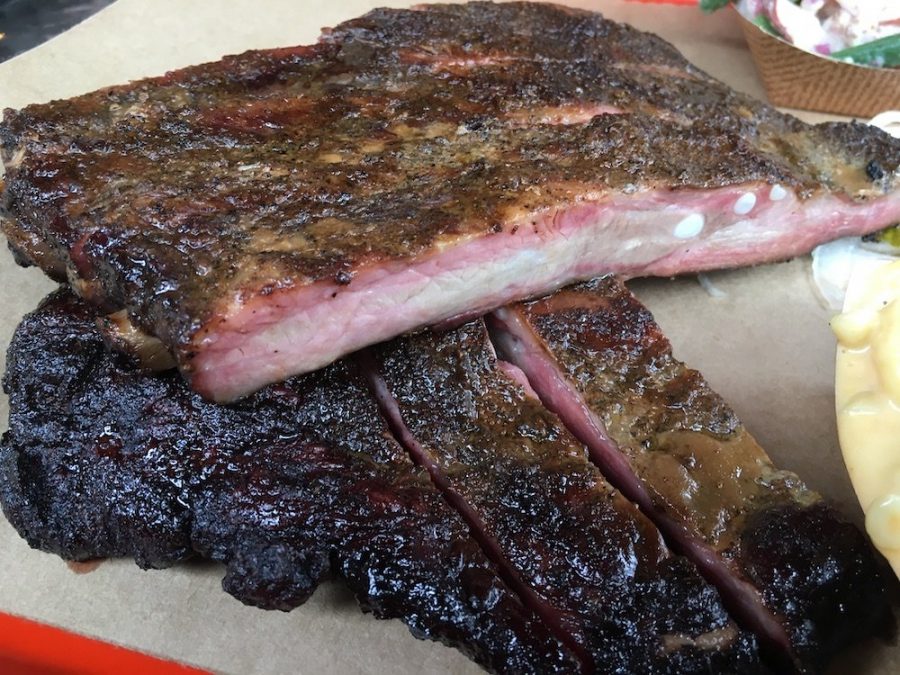 When I stayed in Jacksonville with the Miami Meat Machine, we were there mostly to relax and hang out away from the craziness that Miami can sometimes be. We hit up a couple of the spots I had my eye on, like Carolina Jax (formerly Cackylacky’s), Good Dough, Maple Street Biscuit Company, Metro Diner, Pinegrove Market & Deli. The Bearded Pig BBQ (1224 Kings Ave, Jacksonville) was the only restaurant on my list that all five of us were excited to try.

We parked across the street, and the excitement was building during the short walk. The smoky goodness wafted to us as we stepped inside. We grabbed menus and conferred on what each one of us was getting.

My mind went straight to the two pimento cheese dishes and the sausage; everything else is a blur at this point. The only meat we skipped out on was the turkey.

A couple of tables were empty on the covered outdoor seating, so we set up shop there. I forgot to mention that I had purchased a beer at the bar right after placing my order, and it was now keeping me company at my table right across from Chunktronics.

Pimento cheese makes me lose my mind; ask Colella. He can confirm that I can’t keep it together whenever I see it on any menu. When the platters began to arrive and the giant scoop of pimento cheese met my eyes, well, it’s a moment I won’t forget.

I’m pretty sure Colella mouthed the word ridiculous during this. Before I ripped open one of those saltines to try my current infatuation, my other hand was already forking the Bearded Poutine. Their version of the Canadian delicacy includes burnt ends, pork, cheese curds, and of course, pimento cheese on the fries.

Dude. Duuuuuuude! C’mon, it’s not fair…why are you so far away from me?

How was everything else?

Smoked Wings: They were perfect as is, no need for sauces. Now that I think about it, I never tried any of the Bearded Pig BBQ’s sauces.

Sausage: The sausage was solid, cooked just right, and did its job.

Bacon-wrapped Jalapeño Poppers: Could they be any better? I mean, since you’re asking…what about replacing the cream cheese with pimento cheese?

Mac-N-Cheese: It was very cheezy and slightly sauce, which is not a complaint. Any mac & cheese-a-holic would be happy with this fella.

Burnt Ends: I popped a couple of these guys in my mouth right before going in on my brisket sandwich. I loved them, and luckily they were not overcooked, which always seems to be a problem in other restos.

Spare Ribs: I’m not a spare rib kinda guy, so I didn’t even try them. The fellas seemed to enjoy them based on the sound emanating from them.

Brisket Sandwich: C’mon, took a look at it. Of course, it was awesome, plus I’m pretty sure that was a Martin’s Potato Roll.

Banana Pudding: Can someone even mess one of these up? Well, the Bearded Pig BBQ didn’t; it was great.