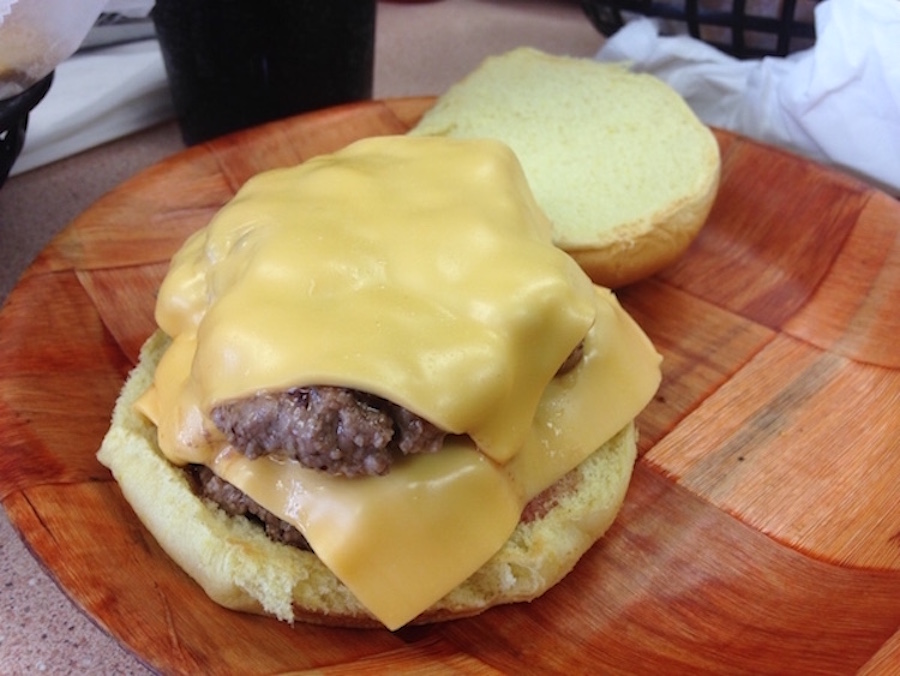 I spent the better part of the last two weeks of a 2016 road trip with my friends; the Miami Meat Machine. We stayed five days in Columbus, Ohio. I would return in 2019 with Marcela during my book signing tour.

This year, as part of the Camacho Bold Burger Battle, we drove through Ohio on our way to Indianapolis from Detroit. We spent a few nights in Troy.

There are many burger joints left to explore in Ohio and when I do, you can bet this list will be updated.

April 9th, 2017 – I love vintage signs, so stopping at American Sign Museum (1330 Monmouth Ave, Cincinnati) was a must. However, don’t expect many small signs since this museum is chock full of giant ones.

April 9th, 2017 – Price Hill Chili (4920 Glenway Ave, Cincinnati) was chosen as the restaurant to try some real-deal Cincinnati chili. Marcela and I were starving, so our starter was a cup of chili.

The chili was enjoyable, but it’s the coney dogs I was dreamin’ about eating; no mustard this time on the wieners, just straight-up coney sauce, and diced onions.

These fellas were phenomenal, so mission accomplished.

April 9th, 2017 – We couldn’t leave town without Graeter’s Ice Cream (11511 Princeton Pike, Cincinnati). Marcela and John got cones while I enjoyed a couple of scoops of their creamy salted caramel with chocolate chips.

As a bonus, they sell Barq’s Red Creme Soda, which isn’t available in our home state of Florida, and we obsess over it.

March 19th, 2016 – On our first night in Columbus, we went to B Spot (5091 N. Hamilton Rd., Columbus) by Chef Michael Symon. This dude has four South Beach Wine & Food Festival Burger Bash wins under his belt.

I attended the Burger Bash, where he won with the Fat Doug (topped with slaw, pastrami, stadium mustard & Swiss cheese).

I thought, here’s an opportunity to try a larger version of the slider I enjoyed a few years back; great burger. In addition, the Stadium Brat (beer brat with griddled onions & stadium mustard) and chocolate shake w/Kahlua are worth ordering; you will love them.

March 20th, 2016 – After hitting up Dirty’s Franks, we knew that dessert in the form of Jeni’s Splendid Ice Cream (59 Spruce Street, Columbus) was in our future. A couple of salted caramel scoops on a house-made waffle cone were excellent.

March 20th, 2016 – Our visit to Tim Hortons (1135 Dublin Road, Columbus) was a spur-of-the-moment decision since I couldn’t eat there five years ago in New York. Colella chose a Boston Creme; I ordered a few Timbits (bite-sized donuts) with a cup of joe. The snacks worked, and we were off to Raising Cane’s.

March 20th, 2016 – I’m not sure how we did it, but we each got a chicken tender platter at our fourth restaurant in a row. I’ve got a significant weakness for chicken tenders and knew I needed this in my life.

There are many chicken tender restaurants around Northern Florida and near college campuses in the Southeastern states; Raising Cane’s (2823 Olentangy River Rd, Columbus) ranks right near the top.

The worst part is we’ll never hear the end of it from him.

March 21st, 2016 – I was invited to White Castle Headquarters before the building was torn down and rebuilt.

May 14th, 2019 – Three years later, I was in town for a book signing at the same spot, but it was a totally different building.

May 12th, 2019 – Marcela wanted nachos and a couple of drinks after a long day of antiquing. Pastimes Pub & Grill (121 E Campus View Blvd, Columbus) was right across the street from the hotel we were staying in and fit the bill.

I was looking for a snack, and the ham & cheese called out to me. The fries had some tasty seasoning on ’em, and the added bacon to my sando tied the whole meal together.

Eating ham & cheese sandwiches is a lifelong passion, and this one did not disappoint.

March 22nd, 2016 – The good folks from White Castle introduced me to the Wendy’s people, and the next thing I knew, I was visiting Wendy’s Headquarters.

May 15th, 2019 – Many years ago, I ran across an auction website selling everything from one of the closed Max & Erma’s restaurant locations. I loved the decor and made sure to remember the name of the regional chain for our next visit to Ohio.

While on my book signing tour, we stopped at the Max & Erma’s (7480 Sawmill Road) in Dublin, Ohio. After walking around and enjoying the decor, it came time to order some grub.

Unfortunately, this Max & Erma’s location was one of the many victims of the 2020 pandemic.

May 16th, 2019 – Titus and I wanted to hit up a restaurant from the Hamburger American book while we were both in Ohio. We both agreed on Gahanna Grill.

June 20th, 2022 – On our way to Maid-Rite Sandwich Shoppe, a DM on Instagram suggested we stop at Jim’s Drive-In (100 Martz St, Greenville). Jim’s Drive-In sounded promising, and a Spanish Hot Dog and a cold root beer could open up our appetites.

It was my second Spanish Dog ever, and the tomato-heavy meat sauce with some vinegar was a different kind of chili in a good way. And the root beer? That fella was served a cold mug, so there were no complaints on this side of the table.

June 20th, 2022 – I’ve often dreamt of eating at Maid-Rite Sandwich Shoppe (125 N Broadway St, Greenville). Unfortunately, the inside of the restaurant has been closed for a few years now.

Marcela was driving, allowing me to overthink my order while waiting in the drive-thru. While the Big Jim Sandwich sounded like a great idea, sticking to a Maid-Rite and a Cheese-Rite was what we were here to eat.

And we had a soft serve swirl for the win.

March 21st, 2016 – I collect Kewpee Hamburgers memorabilia and ephemera, so our stop made my day.

May 17th, 2019 – Another Kewpee Hamburgers fix, so I returned a few years later, plus I was here for a book signing.

March 23rd, 2016 – We laid low on the last night in the Columbus area and picked up some pizza, cheese bread, and a chicken parm hero from Roxy’s Pizza (12110 Lancaster St, Millersport). It’s a solid neighborhood pizza joint.

March 23rd, 2016 & May 15th, 2019 – I was with the Miami Meat Machine on my first visit, so it was a full-on lunch stop. The return three years later was strictly for breakfast and to catch up with Kim Oxley, the owner of Hometown Hot Dogs.

May 12th, 2019 – Green Lantern looked cool, but it was closed. However, I did make it to Rudy’s Hot Dog and White Tower.

This sandwich was a pleasant surprise early in the morning: 1/4 of lb. sausage, cheese, pickle, a fried egg, crispy bacon, and Frisch’s Original Tartar Sauce on a double-decker bun.

I was happily stuffed; maybe too early for a nap?

June 19th, 2022 – There were more than 200 B-K Root Beer (2780 Stone Circle Drive, Troy) restaurant locations around the midwest. This drive-in is one of thirty independently owned restaurants (in Indiana, Michigan & Ohio) left.

B-K Root Beer popped my Spanish Dog cherry. I washed it down with a root beer float; skipping out on one at B-K Root Beer would be criminal.

June 20th, 2022 – Much like the Maid-Rite Sandwich Shoppe, K’s Hamburger Shop (117 E Main Street, Troy) lived on my Burger Bucket List for way more years than I care to admit. Unfortunately, we were leaving Troy that morning, which left a small window for K’s.

Marcela slept in, so I showed up at the 8 AM opening time, ready for some burgs. K’s Hamburger Shop was exactly what I was hoping for and more.

I washed down my cheeseburger and a double cheeseburger with an ice-cold cola, and an hour later, we were on our way to Indianapolis.